Even if it is still a problem in our society, it gets harder and harder to ignore the beggars on the street. As time and days passed by, they have devised ways to ask for help and appeal to our conscience. Some beggars carry crying or sleeping babies while walking the streets under the hot rays of the sun.

Others will bring prescriptions and ask money for medicine, or signboards saying they lost everything to a fire and there are those who bring a blind companion (may it be an old man or woman) holding a plastic cup to ask for spare coins.

It’s shocking how they improve their ways of begging rather than finding a decent job when some are even young enough to work. But recently, a post went viral because a beggar did not come asking for money, but for food.

As Netizen, Faith “Faye” Ares expressed an act of kindness to a homeless man who happens to speak English fluently.

The beggar said to her, “Miss, I am sorry, but I have to tell you something. Please don’t get mad. And sorry to bother you but I’m not gonna ask for money, I’ll be asking for food to eat ‘coz I’m hungry.” Curiosity got the best of Faye, she was hungry as well so she led the stranger to the nearest food chain which is Jollibee. The man was surprised to have someone actually help him and not just ignore him. 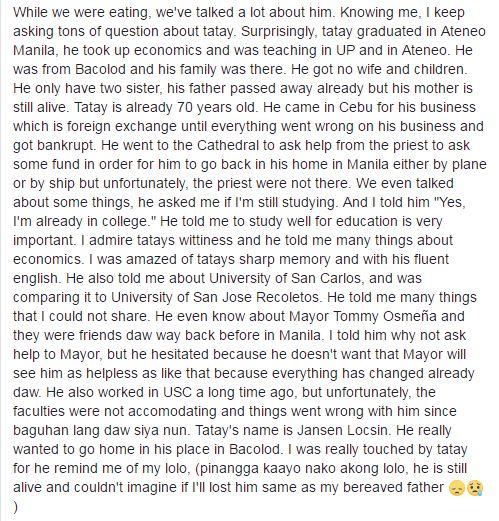 They both ate together and got into a conversation. It appears that the man’s name was, Jansen Locson, who graduated from Ateneo de Manila and a former UP and Ateneo professor. Sir Jansen claims that he does not have a family of his own but has two sisters in Bacolod. It seems that he was in Cebu for a new business venture but unfortunately it failed, leaving him bankrupt and homeless.

After their meal, Faye handed Sir Jansen a hundred peso bill and a bottle of water. At first, he refused the money but she explained that he could use it when he gets hungry again. He asked for Faye’s number so that one day he can thank her again.

What Faye did was truly touching and it left us thinking how the professor ended up in that predicament? Even though he does not have a family of his own, surely he had friends or students who once admired him. We can only hope that Faye’s simple act of kindness will be able to reach Sir Jansen’s family.