We often save money to be able to buy a house or a car someday, and some of us also dream of acquiring designer clothes and bags.

But some people spend money on strange things such as these expensive fruits that are being sold in the market at a very high price, but what’s more strange is that some of these buyers do not eat the fruit. Instead, they place them on display even though it would only take a few days for it to stay in its form.

Let’s look at the list of the most expensive fruits in the world. 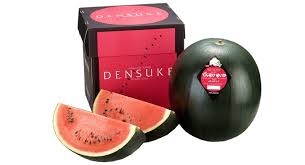 It’s a black melon with no stripes and is a product of Hokkaido, Japan wherein, they produce 10,000 of this kind of watermelons every year. It looks unique, and it costs a fortune.

A Densuke Black watermelon was auction off at 650,000 yen (around ₱ 315,000) and is the most expensive watermelon ever sold. If you’re wondering what it tastes like, let me tell you, it doesn’t taste like gold.

A Japanese Agricultural Expert was quoted, “It’s a watermelon, but it’s not the same. It has a different level of sweetness.” It is not exactly a good description, but most people don’t have that kind of money to burn for just a watermelon, so we’ll have to take his word for it. A fruit that came from Japan again, the Roman Ruby Grapes grows on Ishikawa Prefecture, Japan. It is said to be the most expensive variety of grapes because a strand of this grapes costs 100,000 Japanese yen (around ₱45,500).

It is so well taken care of that each strand must have 25 pieces of grapes, and must have a sugar content of around 18% and weigh 20 grams each. The pieces of grape are about the size of a Ping-Pong ball. Yes, the grapes have to be this perfect to be sold in the market.

3. PINEAPPLE IN LOST GARDENS OF HELIGAN While Japan had been the home for most of the expensive fruits in the world, a pineapple is produced from Lost Gardens of Heligan in Cornwall, England stands in this list. It may look like a regular pineapple, but the process of growing it is so hard since England is not considered as a tropical country.

The pineapple has a priced range around £10,000 (₱ 735,570.00) and what’s more surprising is the way it was cultivated. Farmers had to use a Victorian age technique in agriculture to assure the success of this pineapple. They are grown in greenhouses and fertilized with straw, manure and horse urine. Don’t worry, the fruit was never in direct contact with the urine nor of the other waste.

4. EGG OF THE SUN MANGOES Mangoes are very abundant in a tropical country. But recently, a pair of mangoes was sold for 300,000 yen (₱ 147,757.28) which holds the record of the most expensive mangoes in the world. It was labeled as Taiyo no Tamago which means, “Egg of the Sun”. It was so expensive because it has a high sugar content despite its size. This melon comes from Japan, and they sell such power fruits which are being sold at a ‘power’ price. This melon is produced in Hokkaido, Japan.

Same as Densuke Watermelon’s hometown but these King Yubari Melons are grown in greenhouses and covered by ‘hats’ to prevent sunburn. No wonder it’s so expensive.

It is shocking how these fruits are being sold so expensively, but fruits are considered to be luxury items too. They are grown and well taken care of and contains nutrients and huge water content. They are good for the body.