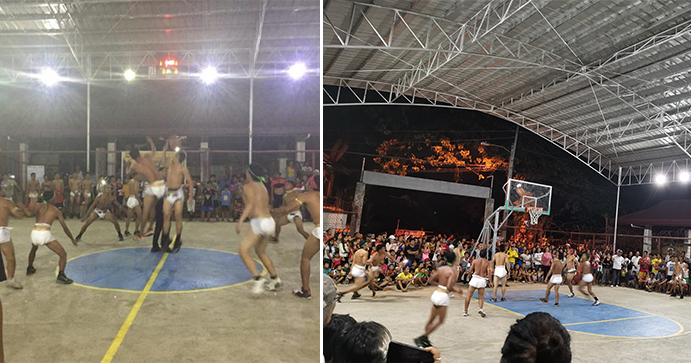 Filipinos are truly passionate about basketball, that’s why today it is also considered as the most popular sport in the country.

In fact, many people find basketball as a great way of exercise and to have fun with friends and possibly make some new ones.

The same reason why you can always find basketball courts in almost every barangay here in the Philippines, filled with kids and adult players during ordinary days.

Recently, many netizens were entertained by the photos of some basketball players who are wearing diapers instead of jersey as their uniforms. The post was shared on Facebook by a netizen named Kurt Justine Vicente Cudal, where he wrote, “Only in the Philippines #luyahandiaperleague #Onlyinzamboanga” Based on his post, the basketball league was held in Luyahan, Zamboanga City. In line with the celebration of the feast in their place, the organizers decided to add some twist in the basketball game. Looking at the photos, it shows that even though players are just wearing a diaper, the league is still complete with the officiating committee as well as the referees.

Many were also amazed that despite their funny attire, all the players can still demonstrate their skills in defense and shooting. The post went viral and has reached over 1,600 reactions, 4,800 shares and hundreds of comments from netizens.

One netizen said that they can now establish their own Philippine Diaper League (PDL) that can beat PBA and MPBL. “Pwede yan dito sa court natin,” said by the netizen who tagged some of his friends in their barangay.

Another netizen said that the ‘diaper league’ seems like a good idea to restore the true spirit of having games during the feast, which is to bring joy to all the people.

It can be seen in the photos that aside from the ‘diaper league’, another highlight of the joyous feast is the ‘tuba drinking contest.’